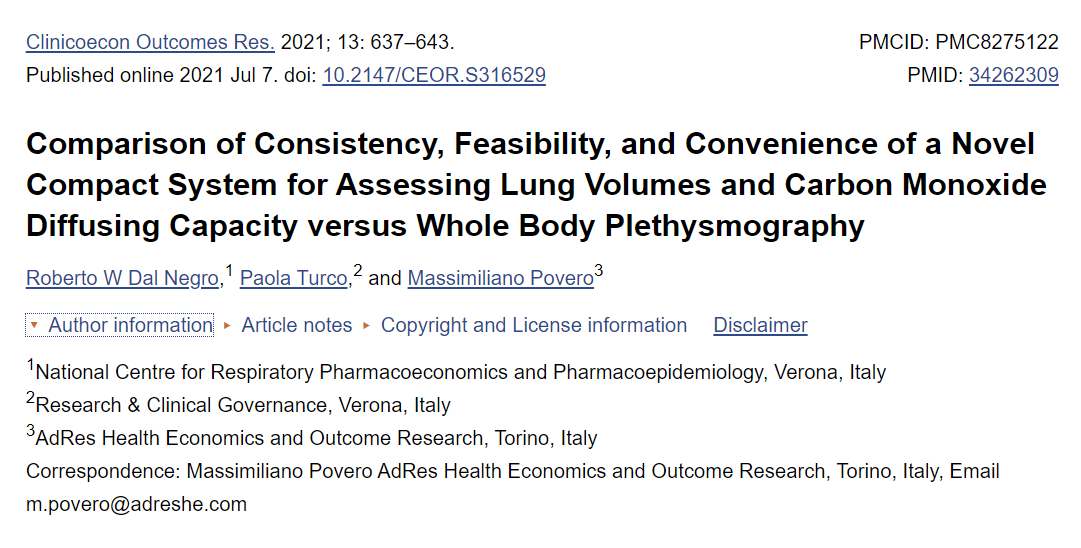 Posted at 00:00h in Blog by amitpulmone 0 Comments

In a recently published paper describing a multi-center study conducted in Italy, the MiniBox+ was shown to be more feasible (significantly lower failure risk) and more convenient (number of attempts needed plus lower execution costs) than whole body plethysmography (“body box”). In addition, the lung volumes (LV) and diffusion capacity (DLco) measurements taken with the MiniBox+ were shown to be highly consistent with those obtained by the body box.

The number of attempts required to achieve the first reliable measurement with each method were calculated for all patients, as well as the corresponding time (in minutes) spent on each test. The cost of measurements obtained with each method was calculated by measuring the time spent by the expert nurse in explaining, demonstrating, and performing the tests, and the time spent by patients (loss of productivity) to perform the test.

The mean number of attempts and the total time spent in taking the first reliable measurements were significantly lower with the MiniBox+, both in the case of success and in the case of failure.

The total cost per test was estimated at €87.58 for the body box and €75.11 for the MiniBox+, resulting in a cost reduction of €12.33, primarily due to the saving in productivity loss.

The authors state that the complexity of the procedures plays a critical role in determining the feasibility of the two methods. They concluded that the significantly lower failure risk, as well as number of attempts and overall time required for first reliable measurements with the MiniBox+, make it a more feasible and convenient method for clinical practice.